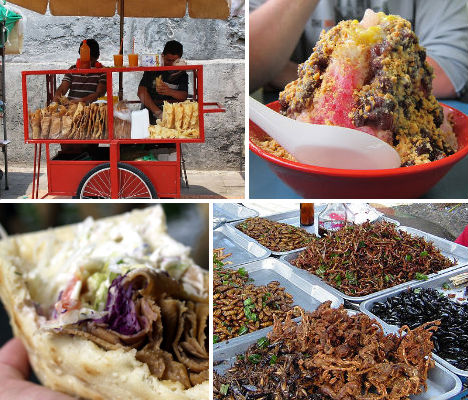 Even when you’re hitchhiking and crashing in hostels, traveling can make a big dent in your bank account, so finding cheap eats is essential. Luckily, in many cities around the world, street carts aplenty offer a dizzying array of mouth-watering local specialties that are prepared fast and easily enjoyed on the go. These 10 cities, from Hanoi to Oregon, tempt travelers with tasty meals that rival restaurant offerings – for a pittance.

In 2009, The New York Times named Marrakech the culinary destination of the year, and street food plays no small part in that designation. As soon as the sun goes down, the city’s central square is quickly populated with temporary food stalls where gastronomes can sample skewered meats, grilled vegetables and bean soups. Simple steamed mushroom-like snails and sheep’s brains are among the more exotic offerings, along with a seemingly endless buffet of spiced North African salads and dried fruits.

Don’t miss: slow-cooked lamb spiced with cumin and served on a round of bread, along with a glass of mint tea.

Vegetarian options abound in Tel Aviv, where you can fill steaming rounds of pita bread with crispy falafel and as many dips and salads as you can fit onto a plate for less than $4 U.S. Most options are healthy, and there are plenty of kosher offerings as well. Meat eaters flock to shawarma – meat rotating on a spit – which in Israel is typically turkey.  It’s served in a flatbread wrap with tahini, hummus, tomatoes, cucumber and a mango-based condiment called amba.

Don’t miss: Lafa, a large pita bread baked in an oven called a taboon and packed with the fillings of your choice. Once wrapped up, it’s the size of a gigantic burrito, so bring your appetite.

Food critics sing the praises of street eats in Istanbul, where twisted rounds of simit – sesame-covered bread  –  beckon in glass cases alongside sugary Sultan’s Lips. In Turkey, meat is king, and while vegetarian dishes are certainly available, standout dishes are nearly always carnivorous, and often include organ meats like tripe. Turkish coffee, kebabs of all imaginable combinations and varieties, and icli kofte (ground meat and spices in a bulgur wheat shell) are among the treats unique to this region.

Some people say the best food in Thailand is served by street vendors. Indeed, a walk along any main street in Bangkok will reveal the irresistible sights and smells of sticky rice with mango, jumbo pawns in curry known as ‘mee krob’, coconut ice cream and roti pancakes. Adventurous eaters will find not only pig organ soup worthy of Anthony Bourdain (containing brain, bladder, heart and penis), but buffets of fried bugs.

Don’t miss: the main event in Thailand – noodles! Egg and rice noodles, thin and fat; Pad Thai, Thai Basil, Khao Soi and more are served as a quick snack for under a dollar a plate.

Singapore is a notoriously fastidious nation, so it’s no surprise that actual street vendors are outlawed. But such restrictions haven’t stopped this Southeast Asian island from gaining a reputation as one of the world’s foremost street food destinations. Government-regulated food courts known as “hawker centers” proffer re-imagined Asian foods – particularly Chinese, Indian and Malay – bearing a distinctly Singaporean flair. Deep-fried bananas, raw spring rolls called ‘popiahs’ and a coconut soup with noodles known as Curry Laksa are among the standouts. For those who like a mix of sweet and savory, there’s Ais Kacang, an odd shaved ice dessert with sweet syrups on top of a bed of red beans, sweet corn, palm seed and grass jelly (or even more perversely, jelly beans).

Don’t miss: Chili crab, often considered to be the national dish of Singapore. Large soft-shell crabs are cooked in a spicy chili sauce and served on a bed of rice, or a Chinese bun.

Who can resist an authentic taco stand? Mexico City is bustling with sidewalk taquerias, the best of which are surrounded by a mob of hungry customers at lunchtime. Sometimes the menus are so complex – with up to a dozen varieties of salsa – that it can be hard to choose. A large burrito packed with beans and cheese along with veggies and smoky sauces will run you under two bucks. Tacos, tamales, quesadillas and flautas can be filled with beef, pork, fish, lobster or any number of vegetarian goodies – but vegetarians should be aware that tortillas and masa are often cooked in pig fat.

If you want to eat cheap in France’s most glamorous city, take to the streets. Parisian food vendors tend to have an international flavor, and Greek gyros overflowing with meat and french fries are a common sight, as are Israeli-style falafel wraps. Pastries can be found all over town, including cookies called macarons in flavors like vanilla and pistachio. The French version of a hot dog is a fun choice, stuffed into a baguette and smothered in melted cheese. Inexpensive sandwiches are everywhere, like the croque-monsieur (ham and cheese).

Don’t miss: crepes, the ultimate French street food. Crepe stands are on nearly every corner, topping the thin pancake-like rounds with either savory fillings like ham, cheese and eggs or sweet treats like Nutella with Grand Marnier or jam.

Vegetarian travelers in search of quick, cheap and tasty culinary delights can’t pass up Mumbai, where meatless options are the rule rather than the exception. Head to Khao Galli (“Eat Street”) which is lined on both sides with food stalls hawking pav bhaji (vegetable curry with bread), aloo pakora (chunks of onion fried in chickpea batter), samosas (savory pastry stuffed with potato, onion and spices), paneer uttapam (grilled Indian farmer’s cheese in a lentil flour crepe) and much more. For safety, seek out busy stalls that specify use of mineral water in their cooking.

In Hanoi, street food is a way of life. In the alleyways of Old Town, outdoor tables are packed with locals enjoying dishes like bún (round rice noodle soup with beef, chicken or tofu), bánh cuốn (minced pork and mushrooms wrapped in a pancake-like roll) and snails boiled in ginger, lemongrass and lemon leaf. In the 6-8 weeks of Vietnamese winter, indulge in lẩu, a hot pot of broth that comes with a huge tray of add-ins like seafood, tofu and tarot root and cooks right on your table. Most dishes don’t cost more than a few dollars.

Don’t miss:  the simple flat noodle soup with beef or chicken called phở, which can be found throughout the city and is emblematic of Vietnamese cuisine; a glass of chè, a thick goopy drink starring green beans, black beans, corn, lotus seeds or taro served over crushed ice and topped with sweetened condensed milk.

Let’s say you can’t leave America, but you still want to sample the street food of the world. America has dozens of fantastic street food cities, not the least of which are New York City, Los Angeles and Philadelphia, but one has it all: Portland, Oregon. Burritos, Korean barbecue, Thai noodles, Vietnamese sandwiches – practically everything on the rest of this list is available on the streets of Portland along with American meals like pizza, burgers, grilled cheese and vegan wraps. With over 500 food carts to choose from, it would take years to try it all. Check out FoodCartsPortland.com for details and reviews.