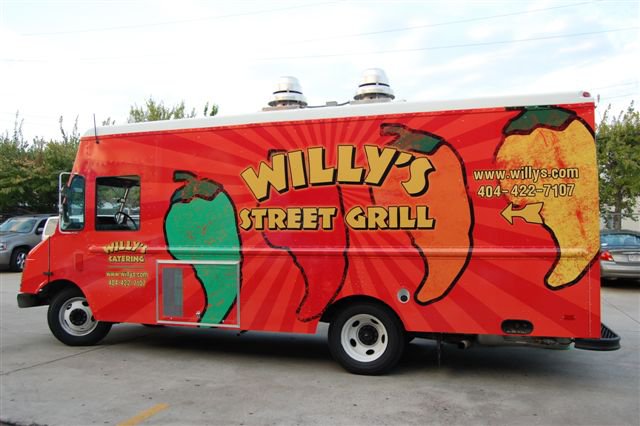 Bitter grew up in Asheville, N.C., eating what he believed was good Mexican food on “all you can eat” Tuesday taco nights. After college, he encountered spicy chili peppers, fresh cilantro and roasted tomatoes during a swing through Colorado. After hitting San Francisco and sampling its acclaimed burritos, he decided to try his hand at selling burritos.

Nearly 16 years after opening its first restaurant on Roswell Road, Willy’s Mexicana Grill has 19 locations in Georgia. The Atlanta Journal-Constitution caught up with Bitter over lunch at a Willy’s restaurant on Howell Mill Road.

Q: How often do you change your menu or add new items?

A: Rarely. We have added a seasonal tortilla soup and the “grande quesadilla” in the last few years. We may look at a few new things like barbacoa. However, we are always looking at ways to make our core menu even better and not just always trying to add something new. We will roll out some new items for our new Willy’s Food Truck.

Q: Tell me about your burrito epiphany.

A: I was working at a restaurant in Colorado, and with some of the Mexican food, I was like, “Oh man, this is sooo good.” Then I moved to San Francisco. I was about 25. Opening a restaurant was just beyond my means. But we would always go down to the Mission District for burritos. And I thought, “Well I can do this.” My dad was skeptical. Maybe because there was a Mexican restaurant on every corner. Or maybe because the first thing I cooked for him wasn’t very good.

Anyway, I moved to Atlanta and saw an ad for a burrito place in Creative Loafing. And I thought, “Well, now I can’t do it. There’s already one there.” But we started up on Roswell Road. We stayed away from Tortilla’s on Ponce, which was burrito mecca. It turns out, that was probably a good decision, starting out. We had people coming from all over, Marietta, Decatur.

Q: The burrito business seems intensely competitive. You’ve got big national companies with lots of resources, like Chipotle, Qdoba and Moe’s. How do you carve out a niche and protect it?

A: We just get really good locations and kept the focus on the food. As far as locations, we are really picky and only pull the trigger when we feel really good about a spot.

Q: How much marketing do you guys do?

A: Traditionally, we don’t advertise that much. Mostly, we use word of mouth, which has been fantastic for us. We are really community-driven and have supported schools and local fundraising efforts.

Q: How did business hold up over the past couple of years?

A: We were pretty consistent through the recession, basically flat. It’s been a good year for us. I think the weather has helped. It’s also the economy getting better. People feel a little more secure in their jobs. The good thing about us is we’re a great deal. Our average check is around $7. Our business is up, but not dramatically. We get so many repeat customers. In Athens, that store is growing nicely. There’s a lot of competition out there.

Q: How much catering do you guys do?

A: Catering is doing really well. The taco bar is a good seller for us. We did huge business for Cinco de Mayo. Catering was probably the area that was most affected during the recession. We do a ton of graduation parties and birthday parties. We have nine vans. It’s a big deal. We do well over 100 events per month. We also just got a new Willy’s food truck, which will be great for parties.

Q: Are people pretty loyal to their burrito brands, or do they switch in and out between various chains?

A: That’s a good question. I get comments from people who say, “I drive past two Moe’s to get to Willy’s.” We get people who eat here three or four times a week. After 15 years, I still probably eat Willy’s four times a week. One guy came in 12 times in one week, ordering the same thing. We had to tell him, “Look man, it’s time to slow down — we don’t want you to burn out.”

A: I hear that a lot: “You guys include the chips and the salsa bar.” A lot of our competitors charge extra for chips and don’t have a salsa bar. What’s a burrito without chips? I am totally addicted to our chips. We searched for a long time for these chips. They’re thin and light. Some restaurants go with the thicker chips, but I like these. We get them from a company out of Texas.

Most of this food is according to my taste: I created things based on what I liked. Thank God, I’m kind of normal.

Q: How many new restaurants are you planning to add?

A: If we could do one or two a year, that would be great. We often try to open quietly, but we usually just get mobbed right away. We don’t want to grow just for growth’s sake. But if we find a good location, we’ll do it. Our customers are always telling us about new sites. They don’t want to have to drive too far.

Q: How do you spend most of your time?

A: I wear so many different hats. Every day, I could be doing accounting, scouting sites, working in the stores or working on marketing. It keeps the job exciting.